Agriculture of the Khazar Khaganate in a Forest-Steppe Zone 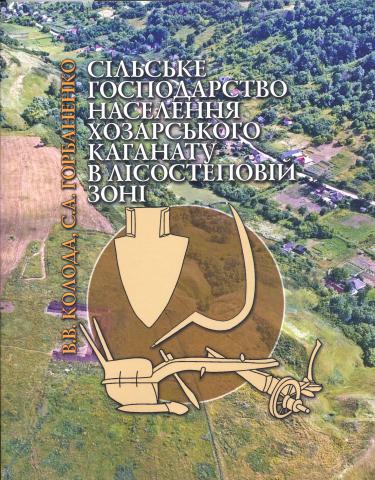 Project: Scientific monographs
Authors: Koloda V.V., Gorbanenko S.A.
Year: 2018
Pages: 170
ISBN: 978-966-360-347-6
Publication Language: Ukrainian
Publisher: PH “Akademperiodyka”
Place Published: Kyiv
doi: https://doi.org/10.15407/akademperiodyka.347.170
The history of the Early Middle Ages of Eastern Europe is hardly thinkable without Khazar khaganate. The authority of Khazaria unified peoples of different ethnic group and derived enrichment experience of craftspeople from Byzantine centres of the Black Sea Littoral; thereby, they were able to create an economically powerful state with potent military capabilities. As a result, the Khazar khaganate became one of the most high-powered states in the Black Sea region in military and political ways at the end of I millennium among Byzantium, Kyiv Rus, Persia, and the Arabic Caliphate. Mordern archaeological reflection of material and intellectual culture of the khaganate is Saltov archaeological
culture (the middle of VIII — the middle of X cc. AD).
One of the most considerable contribution to its formation and development was made by Alan tribes, that were partially resettled from the North Caucasus to forest-steppe zone of the Seversky Donets and the Oskol by the khaganate authorities and lingered on up to the middle of X c. AD. The basis of their householding, as well as khaganate economics, was agriculture and a farming sector.
All of this determines the importance to study a latter occupation of Saltov culture bearers exactly in a forest-steppe zone as one of the bases of khaganate economic power and big military and political potential at its northern-western boundaries. This particular item was analysed in the authors’ works among which the monographs of 2010 and 2013 are (Koloda, Gorbanenko, 2010; Gorbanenko, Koloda, 2013). However, since the latter was published (2013), there have been obtained new archaeological, palaeoethnobotanic and archaeozoological material. They enrich our knowledge about agriculture and farm sector of forest-steppe Khazaria and these need introducing into scientific discourse.
The basis of introduced research serves the data which have been received for 25 years while archaeological excavating such settlements as Verhnij Saltov, Koroрovy Khutora, Mokhnach, Pyatnitske I, and Chuhuiv.
The aim of the research is, firstly, introducing new data on farming sector of the population in a forest-steppe zone of the Khazar kaganate and, secondly, advanced analysis involving large quantity of data from natural sciences.
Read_more.pdf
Contents.pdf

Diversity of modern avifauna of Ukraine

Ukraine in the XIX century: the age of modernization